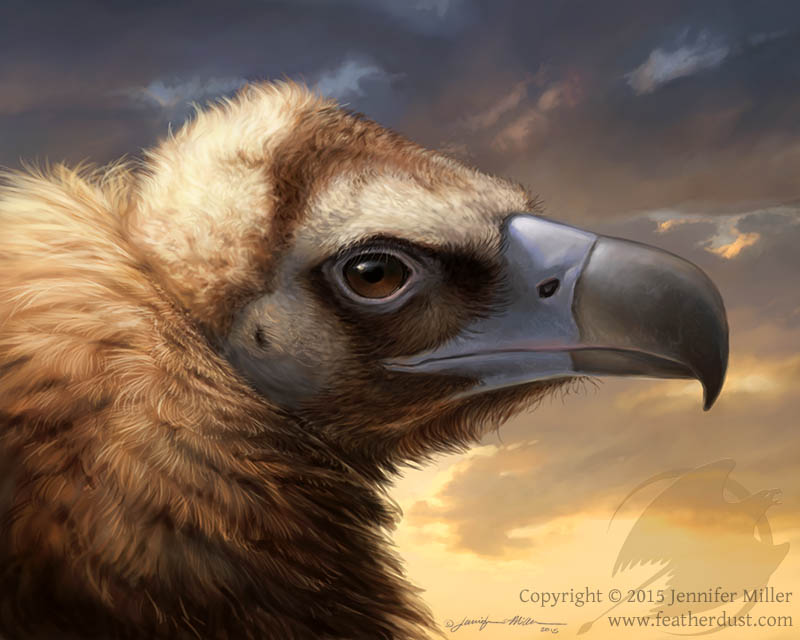 Above: Cinereous Vulture portrait, done in Corel Painter. Who could hate that face? They are declining/Near Threatened.

MY WONDERFUL PEOPLE OF THE INTERNET:
Do you know what tomorrow, September 5th, 2015 is?
IT IS INTERNATIONAL VULTURE AWARENESS DAY.

That’s weird, why do vultures get a day? Don’t we have enough days already?
Well, we probably do have a lot of days (like about 364), but guys, vultures are really important. WAY important. And the world is losing vulture populations at a terrifying rate. Everyone gets understandably upset when a charismatic animal is going extinct, but less so for animals that are equally as important but maybe not as pretty or noble. Some species of vulture have declined over 95% in the last 20 years. To talk about one species, the White-Rumped Vulture; it was possibly the most abundant large bird of prey
in the world- its overall population almost certainly
numbered several million individuals. But since the mid-1990s, IUCN
says, “it has suffered a catastrophic decline (over 99%) across the
Indian subcontinent,” and IUCN puts the total population now at less
than 15,000. Bird Life International suggests that the population might be much lower, with as few as 2,500 adult individual birds.

Why should we care so much? Other animals are going away, too. People are starving. Bad stuff goes down all the time.
Yes, and it’s okay to care about more than one cause. This is just a chance to bring vultures to the attention of people that might not otherwise notice! Most people could care less about vultures, or might even dislike them. But they are actually super neat birds, and do a tremendously important job of quick scavenging. Over time, it is true that carcasses will return to the earth through the work of bacteria, insects, and other scavenging animals. But vultures do this quickly, efficiently, and in a way that greatly reduces disease. Vultures clean as they eat; their bodies are such a hostile environment for bacteria and disease that what goes into a vulture disease-ridden, comes out .. well, not sparkly clean but sans disease. These badasses can eat carcasses riddled botulism, cholera, rabies, the bacteria that makes anthrax, etc… and get rid of the nasties. Once eaten by a vulture, it’s a dead-end for disease. Vultures keep these diseases from spreading via other, less hardy scavengers, and keep said diseases from migrating into the ground and in some cases into water supplies (I’m looking at you, botulism).

The disappearance of vultures is keenly felt in some parts of the world. In parts of India, where vultures were once extremely common but have been wiped out by as much as 99%, they are experiencing a huge surge of feral dogs (most deceased cattle in India are not consumed, which used to be Vulture Party Time, but is now rat and feral dog party time) and in turn a big problem with rabies and other disease. over 36% of the world’s death rate from rabies occurs in India. There are estimates that the surge of problems has cost India the equivalent of over $34 billion dollars US, for something that vultures used to do for free.

Okay, what can I do?
There is something to be said for spreading awareness. Talk about vultures this weekend! Blog about them! Tweet about them! Annoy your family on facebook! Draw a vulture and make people look at it! Share this post, or any post you like about vultures. If you live in a place with vultures, take some photos and share them. TALK ABOUT HOW NEAT VULTURES ARE. While most of the people that need to hear about it are unlikely to be on Tumblr, people in general don’t care enough to save something unless they like it. So talk about some vultures.

If you want to and are able to, you can donate to a few places to help vultures. For anyone that DOES donate to help vultures and donates $10 or more before Sept. 15th, I WILL PERSONALLY SEND YOU A POSTCARD of my painting of the Cinereous Vulture, above*. For free. Just email me with a screenshot of your donation, and your mailing address. jennifer@featherdust.com This is my tiny way of saying thank you!

Some reading about vulture populations, why they are declining so rapidly, and some ways to help:
Nat Geo: Why African Vultures Are Collapsing Toward Extinction
NY Times: Vulture Populations Wane, Poisoned by Man
Peregrine Fund: African Vultures Declining at a Critical Rate
IAATE has cool vulture shirts for sale– 100% of proceeds go to vulture conservation!

Want to actively help? In some parts of the world, surveys are being done and mitigation is in place to keep things as simple as power lines from wiping out large numbers of vultures. This link goes to a Facebook post where Walter Neser looks for vulture casualties under power lines, which are then modified if incidents are found. If you are in South Africa, you can contact him to help out directly: Walter Neser – wneser@gmail.com 0765939849
If you are not in South Africa, you ask at rehabilitation centers, bird of prey centers, and other resources to ask if your area or country has a similar program in place (I tried researching this for more areas but had trouble finding info).
The loss of life under just one tower in South Africa (warning, photo shows deceased vultures, no gore)

If you have any additional information, including ways to help, please reblog this and add them!

The situation is not completely hopeless…
There have been some major breakthroughs in saving Asian Vultures!
As of August 27th, diclofenac has been banned in large dosages in India. This drug, commonly used in livestock, is responsible for killing millions of vultures. That’s millions.
US Fish and Wildlife: Three Cheers for the Amazing Asian Vulture!

Despite this good news, vultures are not out of trouble yet. The reasons for their decline are many, from human development, livestock management problems, illegal poaching, shooting, other poisoning (intentional or not), poisoning from elephant and rhino poaching (if vultures circle your poached kill, it alerts authorities, so the solution for poachers is to kill the vultures, too), and many other issues. So, share vultures this weekend! YAY VULTURES! Tag stuff on all your social medias with #vultureawareness #vultureappreciation and #IVAD and let’s make it blow up with vultures in everyone’s FACES.

Vultures are rad, people!  Let’s show them some love!  Also Jennifer Miller/Nambroth is a boss artist so RESPECT!

Leaping, sitting, forgetting her hairbow–Moxie does it all!

Throwback Thursday–from 2007.  Probably something I should revisit someday.

Longtime fans of mine will be familiar with the foot sketch.  The PurseHead is new, though.  (Took me forever to find a purse!)

Depression.  Mine’s hormone-based (try being post-menopausal in your mid twenties!) but when it grabs me, man!

I’m curious! Also open to thoughts on things I could try incorporating in future art. 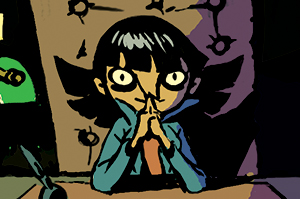 Margo Maloo is one of the best web comics out there.  Period.  Go subscribe!

Every time to you lie to Scott Bakula, your alignment changes.

Not for the better.